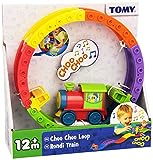 Get on track with Choo Choo Loop from TOMY, the colourful train with everything you need to get rolling! There are three ways to play. 1. Assemble the tracks into a loop and see how the locomotive’s wheels make the tracks go round. As soon as it hits the buffers, the train will go into reverse and change the direction the hoop goes around…until it reaches the buffers again! 2. Put the tracks together in a straight line to form a bumpy track with buffers at each end. Again, the loco will change directions every time it gets to the end of the line! 3. Children can also use the locomotive on its own. Grippy wheels mean it will be happy on most surfaces. And don’t forget: every time it bumps, it changes direction!Simply press down on the train to start the engine and listen for “choo choo” sounds, music and a whistle.