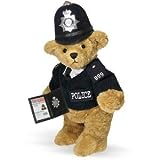 The Great British Bobby is wearing his regulation NATO style blue Police jersey reinforced with tough nylon elbow patches and embroidered epaulets. His shirt, tie and jumper are all removable so that he can get changed at bedtime. Even his miniature helmet has been carefully replicated to both look and feel just like the real thing. Our Great British Bobby arrives ready to make an arrest carrying his own warrant card and badge detailing his name Edward Walker. Bobby was our first Great British Teddy Bear created to raise money for the charity Child Victims of Crime. Bobby Bear now has two friends Emily Goodheart and his very stern Sergeant Winston Growler. Bobby is currently appearing in schools, teaching child safety and can often be seen helping Care of Police Survivors he proudly wears the epaulette number 999 to help teach children the emergency services number at the earliest opportunity. Every Teddy Bear and their costume has been tested to exceed all international toy safety standards: EN71 1/2/3 & ASTMF 963 CPSIA

Bobby Moore is a legend of English Football! He led his country as Captain for more than 10 years and famously to glory winning the World Cup in 1966. This Limited Edition Action Man, one of only 1966 has been produced in honour of his extraordinary career and also to support the work that continues in his name for the cancer charity Cancer Research UK. Bobby’s life was tragically cut short by bowel cancer in 1993 and for every edition sold there is a donation of £6.00p to the Bobby Moore Fund. The fund’s goal is simple, to bring forward the day when bowel cancer is cured! Thank you for honouring his memory with your donation. The inscription beneath his statue at Wembley Stadium exemplifies the standing of this great man across the world … “Immaculate Footballer, Imperial Defender, Immortal Hero of 1966, National Treasure, Master of Wembley, Lord of the Game, Captain Extraordinary, Gentleman for all Time”.