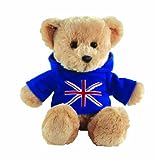 This beautifully crafted Union Jack Bear is made with premium materials and is part of the world famous Aurora range. It has a soft plush feel and comes with its own cool Union Jack design Hoodie! A great retro style gift for fans of ol’ Blighty.

Cute and cuddly plush that is 8in tall. 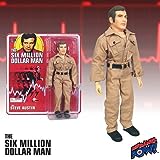 ‘A man barely alive.’ Steve Austin Action Figure derived from The Six Million Dollar Man! Multiple points of articulation.;Series-true fabric clothing. Retro styling. Better, stronger, and maybe even faster! Col. Steve Austin is brought back to life once more in this Steve Austin Action Figure that presents the likeness of actor and pop-culture icon Lee Majors in a long-sleeved khaki shirt and matching cargo pants, with his signature belt buckle and black running shoes.;He’d be an impressive addition to your The Six Million Dollar Man collection! It’s been a long time since the world has seen collectibles of the original Col. Steve Austin, ‘a man barely alive,’ so Bif Bang Pow!;is excited to bring these 8-inch scale Six Million Dollar Man action figures to loyal fans of the celebrated TV series everywhere. Continuing Bif Bang Pow! ‘s successful partnership with EMCE Toys, these truly unique figures feature multiple points of articulation, series-true fabric clothing, and a retro style that hearkens to the bestselling ‘Mego’ action figures of the 1970s and 1980s… only better than they were before… better, stronger, and maybe even faster!;The Six Million Dollar Man is an American television series about a crippled test pilot and former astronaut who is rebuilt with nuclear-powered limbs and bionic implants. Working for the OSI, he serves as a truly one-of-a-kind intelligence agent. The popular show aired on the ABC network as a regular series from 1974 to 1978.