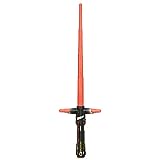 Launch into action and adventure in the world of Star Wars! Discover the exciting stories of good versus evil in a universe of heroes, villains, and aliens. A dark warrior strong with the Force, Kylo Ren commands First Order missions with a temper as fiery as his unconventional lightsaber. You can feel like Kylo Ren with this Extendable Lightsaber that extends for a duel with a flick of the wrist. Imagine the thrill of a heated battle with this and other role-play toys from Star Wars. Each sold separately.