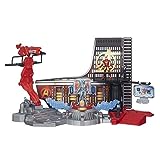 Defend your base from the evil Ultron with the Marvel Avengers Age of Ultron Iron Man Lab Attack Playset. Iron Man will stop at nothing to defeat Ultron and his forces. Join in the fight by defending the lab with Iron Man and his launching missile!  Can Iron Man capture Ultron and bring his foe’s destructive plans to an end? Get right into the action with the Iron Man Lab Attack playset! This awesome Avengers playset stacks with the Hulk Buster Breakout and Captain America Tower. A great gift for ages four and up.