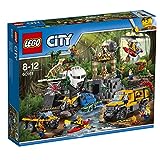 – Includes 7 minifigures: a pilot, 2 drivers and 4 scientist/explorers, plus leopard, crocodile, snake, frog and 2 spider figures.
– Features an amphibious helicopter with minifigure cockpit, winch, spinning rotors and pontoons, plus a heavy observation truck with an articulated crane arm, room for the kayak on top and motorcycle on the back, and an amphibious vehicle with minifigure cockpit and storage compartments.
– Also includes a plane wreck build with opening cockpit and room for a box, a cave with leopard pounce function, a temple with boulder release and trapdoor functions, plus a buildable Venus flytrap with closing ‘mouth’.
– Remove the top of the truck to access the observation room.
– Lift up the plane’s cockpit with the crane arm to discover the treasure.
– Push the release function on the back of the cave to make the leopard pounce.
– Lower the helicopter winch and haul away the treasure.
– Pull the vine to send the boulder tumbling.
– Pull the lever to release the temple trapdoor.
Push the top of the Venus flytrap down to trap the spider.
– Accessory elements include a map, 2 boxes, one red crystal, one red diamond, 2 golden frog statues, boulder, shovel, crowbar, chicken leg, machete, compass, axe, paddle and a buildable campfire.
– Helicopter with rotors measures over 3″ (9cm) high, 9″ (23cm) long and 7″ (18cm) wide.