LEGO 76081 Guardians of The Galaxy Faceoff, Vol.2, The Milano vs Abilisk – Childrens Toys and Games
Skip to content 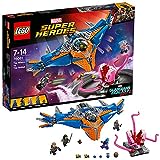 It�s space craft against space monster with this The Milano vs The Obelisk set from LEGO Super Heroes!

The Guardians of the Galaxy are back and there�s an epic space battle in play. Star-Lord, Gamora, Drax and Groot fight the tentacled Abilisk monster in their quest to find the Annulax batteries. They need all the fire and flying power of The Milano to combat this beast!

This set includes four mini-figures and a Groot figure. The Milano drops bombs, fires stud shooters, has movable wings and can open its cockpit.