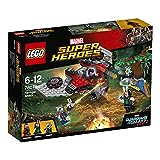 Team up with Mantis and Rocket and fight back against Taserface in the LEGO Marvel Super Heroes Ravager Attack 76079!Stage a forest face-off between Taserface in his M-ship, featuring four stud shooters and a minifigure cockpit, and Rocket and Mantis, who are hiding in the forest setting featuring a buildable tree with branch elements. Help the two Guardians of the Galaxy build the six-stud shooter, then fire at the approaching M-ship and work as a team to fend off the Ravagers.The LEGO Marvel Super Heroes Ravager Attack Set offers an age-appropriate build and play experience for children aged 6-12 years old.Includes three minifigures: Mantis, Rocket with two guns, and Taserface with big gun.Minimum Age: 6 YEARSRecommended Age: 6-12 yrsWARNING! Not suitable for children under 3 years of age due to small parts.