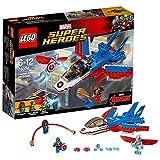 Super-Adaptoid has stolen Captain America�s shield and is getting away! Give chase in Captain America�s jet and grab it with Ms. Marvel�s super-human stretching arms. Fire the disc shooters at the evil android, but watch out for its awesome Power Blasts!