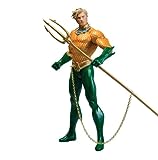 The New DC 52 was THE entertainment story of 2011! After the acclaimed release of the first figure comes the next wave of figures in the ongoing line based on Geoff Johns and Jim Lee’s best-selling Justice League! From the depths of the ocean comes the King of Atlantis, Aquaman, featuring a unique take on the classic costume as designed by Lee.