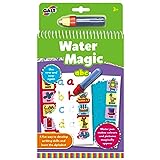 Water Magic – ABC is the arty way to develop writing skills. Use the water pen to form the letters of the alphabet following the dotted lines and see the coloured letters appear. Then reveal two pictures with words that begin with the letter. The letters, pictures and words will appear and later disappear over and over again. This art set’s for ages three and up. What’s in the box? Water pen 3 x sheets