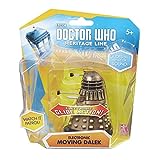 Exterminate! Exterminate! People will think twice about going in your bedroom with a Doctor Who Motion Bronze Emperor Dalek on patrol. The Doctor Who’s most feared enemy feel no pity or remorse for their victims. Recreate scenes from their greatest encounters with this fully mobile electronic terror! This highly detailed Dalek glides on a wave of sound and makes a threatening buzzing noise. Collect the series and create your own inter-galactic army! A great gift for Doctor Who fans aged five and up. Please note: 1 x LR44 battery required (not included).