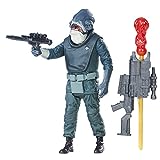 Enter the world of Star Wars and launch into action and adventure! Discover a galaxy of starships and vehicles, and get immersed in exciting stories of good versus evil against a backdrop of a universe populated by heroes, villains, droids, and space creatures. Admiral Raddus was one of the earliest fleet officers of the rebellion. When the Galactic Empire invaded the aquatic world of Mon Cala, Raddus led the Mon Calamari into battle. Re-create the biggest battles and missions in the Star Wars universe with this Star Wars Admiral Raddus figure! Figure is 3.75-inch scale and features movie-inspired design. Collect other Star Wars figures, vehicles, and more to expand any Star Wars collection! Additional products sold separately. Star Wars products are produced by Hasbro under license from Lucasfilm Ltd. Hasbro and all related terms are trademarks of Hasbro.