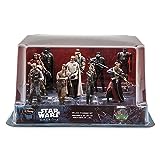 Star Wars Rogue One fills in the details of just how those secret plans for the Deathstar base were recovered. This deluxe set includes all of the main characters from the film as well as cross over characters into Episode IV such as Darth Vader and Director Orson Krennic.