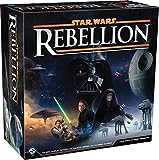 A board game of epic conflict between the Galactic Empire and Rebel Alliance for 2 -?4 players ;A classic Star Wars experience, in which the actions of a few heroes (or villains) decide the fate of the galaxy ;Command armies, win planets to your side, deploy Star Destroyers, conduct secret missions, or destroy whole worlds with the Death Star ;Contains more than 150 plastic miniatures to represent your military forces