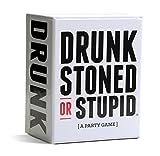 DRUNK STONED OR STUPID is a party game for you and your stupid friends. Each round a card is drawn and the group decides who in the group would be most likely to…

First a player declares themselves the judge and reads a card aloud. Each person then says who in the group should be tagged with this card and why.

Accusations can be based off of personality traits, past stories, or really anything at all. As long as you can argue your point, it’s fair game. The judge considers all accusations and makes the final ruling on who should be tagged with the card.

This person keeps the card along with the shame. The judge rotates to the next person in the group. First person with 7 cards loses. There are no winners in this game… only losers.

WARNING: This game is not for everyone. It was created by two brothers in their early 20s who have no problem shamelessly calling out their friends and being called out in return.